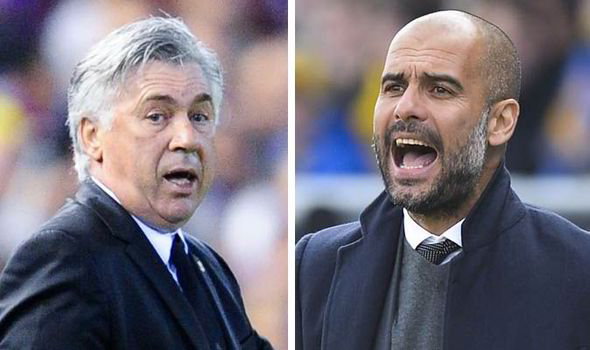 Image Courtesy of express.co.uk
Guardiola Out, Ancelotti In At Bayern

After months of speculation it’s finally a done deal, Pep Guardiola will leave Bayern Munich at the end of the season and be replaced by Carlo Ancelotti. The announcement was made official this morning on Bayern’s Twitter page.

Pep Guardiola decided not to renew his contract and while he was contemplating whether he wanted to continue with the Bavarians or not, the Bayern bosses found his replacement swiftly. They decided to be proactive and reached out to the best manager available, with all due respect to the recently sacked Jose Mourinho.

The speculations surrounding Guardiola had reached a whole new level in the last couple weeks, as he had everyone waiting on his decision. Most suspected he would leave in the summer, he hadn’t renewed his contract and with Mourinho’s firing, Manchester United’s poor form and the never ending saga with him and Manchester City the writing was on the wall he would seek a new challenge. Now he gets to decide which challenge in the Premier League he would like to embark on.

At City he would get the best squad and all the money in the world he needs to buy the players he wants and mold the team to his liking. He has a great relationship with City’s sporting director Txiki Begiristain, whom he knows well from his days at Barcelona. While Man City have a coach right now in Pellegrini they have never been shy in showing their adoration for Guardiola, if and when he were to become available. City are the favorites to land Pep purely based on the longevity of their pursuit but it’s far from a done deal.

At Manchester United Pep would embark on the biggest project out of the three clubs, but also the one that he most likely prefers the most. He has shown adoration for United in the past and this would be the time for United to cash in on that. Yes, I understand Louis Van Gaal is still there but let’s be real…United are unwatchable under the Dutch coach. He was supposed to come in and stabilize the team and he has not done that, actually far from it. They play the most boring style of football in the Premier League and with the talent available to him that should never have been the case. If it were up to me I would throw everything at Guardiola and make him come to Old Trafford. Not only would you get arguably the best coach in the world and replace an outdated one in Van Gaal while improving on your market share, but you would also take Pep away from your main rival on the other side of the town.

Chelsea announced their interim manager yesterday in Guus Hiddink and appeared to have stopped the bleeding with that 3:1 win against Sunderland, at least for now. Looking at long term changes, however, the availability of Pep will most certainly peek the interest of Chelsea owner Roman Abramovich and the Blues faithful as well. At Chelsea Pep would get all the money he needs with a well established squad (albeit they have not played like that this season), but there is the fear that Chelsea will not be involved in the Champions League next year considering their putrid form this season. There are positives when it comes to Chelsea and Guardiola could certainly turn things around quickly, but the lack of Champions League and Abramovich’s quick trigger will most certainly play a huge part in him saying no the Blues.

As for Bayern, they lose one of the best managers in the world in Guardiola only to replace him with someone seen on the same level as Pep in Carlo Ancelotti. The Italian is seen as a Champions League expert, having won the trophy twice with A.C. Milan and once with Real Madrid (La Decima against Atletico Madrid in 2014). He never should have been fired from Real and it is Bayern who will benefit from that in the years to come. Carlo’s tactics are rarely matched by his counterparts and his ability to create fantastic counter-attacking football will only help improve an already devastating squad at Bayern.

He will win Bundesliga almost by default (even with the likes of Dortmund, Wolfsburg, Leverkusen and Schalke getting better every year) and will come in solely to win the Champions League. His ability to massage the egos in the dressing room are second to none in today’s game. At Real he was able to keep the likes of Ronaldo, Bale and Benzema happy and he can certainly do the same in Munich, which must have been one of the main reasons Bayern bosses decided to announce his appointment.

Guardiola was never going to sign an extension and that is fine. He is seen as a mastermind in Germany but also someone who got outclassed two years in a row by Real Madrid and Barcelona in the Champions League semifinals, something no longer acceptable at Bayern. There will be those who will be sad about his departure and those will gladly waive goodbye to the tiki-taka he brought with him. One thing is for sure, there is no Bayern Munich fan out there who will be unhappy with the replacement coming in – Bayern will most likely not skip a beat.

Transfer Deadline Day as it happened

All the latest transfer and updates