The NBA is predictable, they say. And maybe so. The Cleveland Cavaliers and Golden State Warriors have made the past two NBA Finals. The Cavaliers and Warriors were everyone’s picks to make third consecutive NBA Finals trips this season. The Cavs and Dubs are 8-0 to start this postseason, completing two easy sweeps.

So yeah, the conference finals seem like a formality. Prepare for The ’Land vs. The Bay III. It’s going to be awesome.

Never in NBA history have two teams met in three consecutive NBA Finals, though the Boston Celtics and Los Angeles Lakers came close in the 1960s … and 1980s … and 2000s. But the league’s history is full of instances where two teams met for the title twice in a row, split the series and never got the rubber match to make any real determination. That’s what we have the chance to settle now. And that’s one of several reasons we need this series.

The 2015 Finals featured a gutted Cavs team with Kevin Love out for the series and Kyrie Irving out for almost all of it. The 2016 Finals featured a bizarre set of circumstances (a suspension, an injury, a sequence in which Love legitimately locked down Stephen Curry) that led the Warriors to blow a 3-1 lead despite a record-setting 73-9 regular-season and the first unanimous MVP in NBA history. But in 2017, these teams are playing their very best basketball at the most important time.

Not only that, but they’ve both loaded up beyond what we’ve ever seen before from them.

The Cavs’ additions of Kyle Korver and Deron Williams deepens their crunch-time options with two championship-starved former All-Stars. They’re shooting an absurd 43.4% on 3-pointers in the postseason, despite Irving’s uncharacteristic inefficiency. More important, coach Tyronn Lue and big men Love, Tristan Thompson and Channing Frye seem to have fully adjusted to playing small-ball. The defense hasn’t been good and probably never will be, but the offense is obscene enough to make up for it.

And the Warriors added Kevin Durant. Yes, they also filled out the rotation around him, built some chemistry and then let Curry get hot while Durant was out in March and April. But mostly they swapped Harrison Barnes for Durant. As a reminder, Barnes shot 35.2% in the 2016 Finals. He’s a talented player who had a nice breakout performance with the Dallas Mavericks, but he was the weak link in the old “Death Lineup.” And he’s not Kevin Durant.

Plus these teams still have so much unfinished business. Draymond Green’s groin kick and the ensuing words helped turn LeBron James into an unbeatable monster — he hasn’t lost a playoff game since Klay Thompson called him a crybaby. The Cavs were furious at Durant’s trash talk to Love in their Christmas Day game. Oh, and of course Green had to stoke the fire even more. 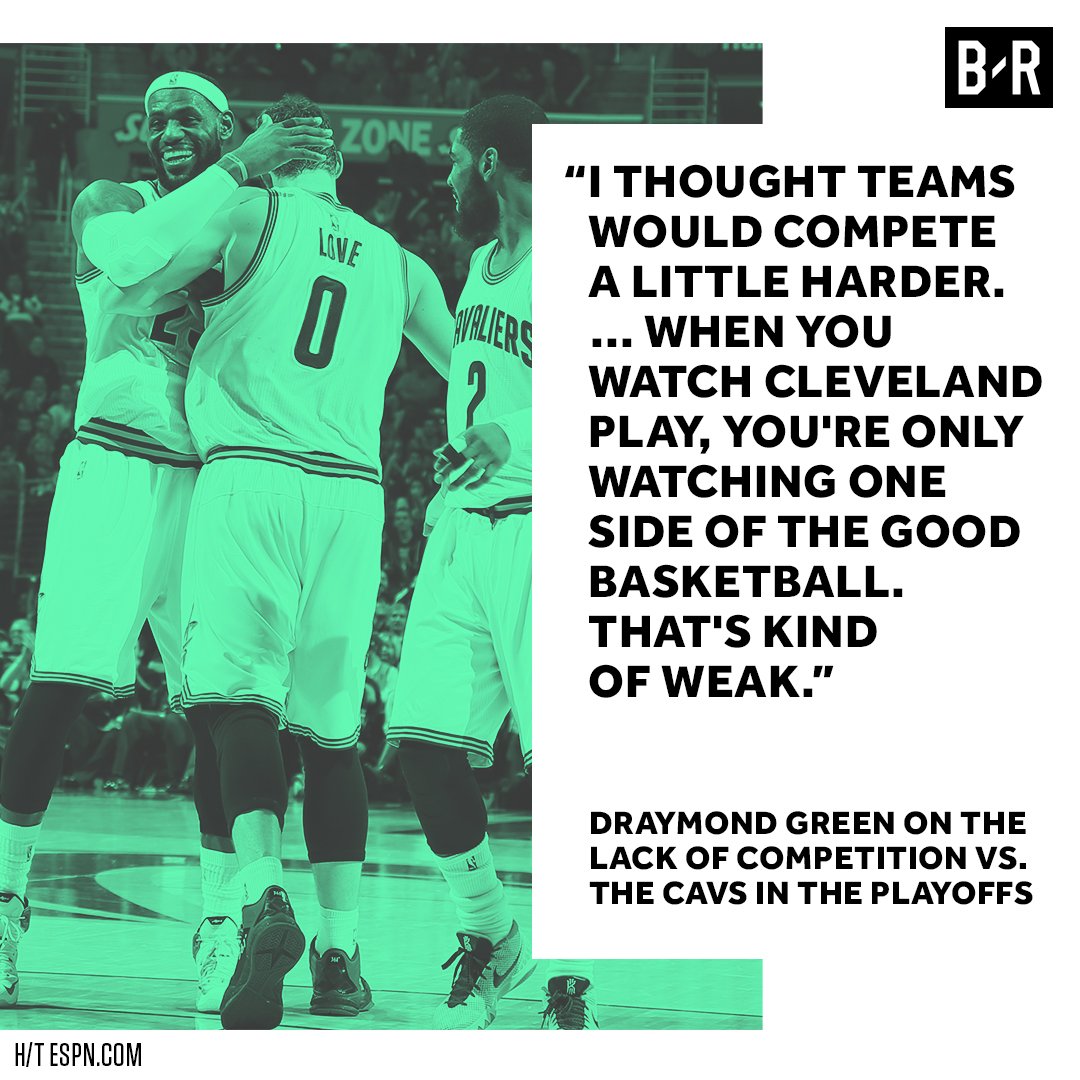 The Celtics and Washington Wizards, Houston Rockets and San Antonio Spurs — they’re giving us some real entertainment in the second round, and that’s great because the Cavs and Warriors sure didn’t. The fans of the teams that win might be able to talk themselves into believing they can steal the series, but they undoubtedly know they’ll need a little bit of help — think Love’s shoulder dislocating or Green getting suspended. And even if they do make it to the Finals, can we really expect any of those teams to knock off these two firing-on-all-cylinder juggernauts? (Maybe the Spurs, you’re thinking? Let’s see what their backcourt looks like next season.)

No, the NBA needs the Warriors and Cavaliers back in the Finals. We need to know to whom this era belongs. We need to know more about James’ standing vs. Michael Jordan, more about whether Curry is actually capable of playing like himself for an entire Finals series. We need for Durant to get his second shot at James. We definitely need to see Finals Andre Iguodala again.

Perhaps the NBA shouldn’t be so predictable. It definitely shouldn’t be so heavily defined by super-teams. There are a few long-term measures (that seem less than perfect) in the league’s new collective bargaining agreement meant to prevent the next Kevin Durant from signing with the next Warriors powerhouse. But this season is all about the Cavs and Warriors. Any other Finals would feel like a lie.

Westbrook: Man on a mission