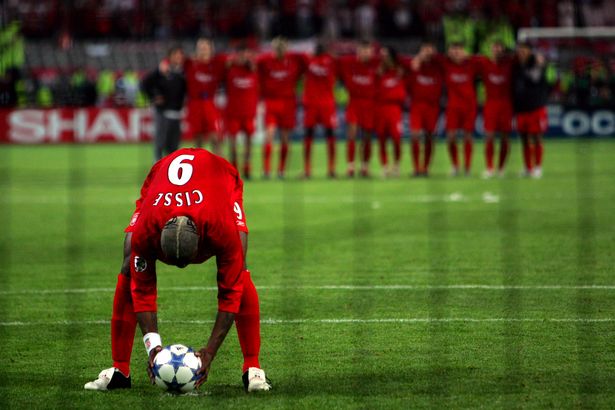 The Chronicles of Djibril Cisse

Djibril Cissé joined Bastia in January 2014 but after failing to score a league goal in more than year he has announced his retirement. Photograph: John Berry/Getty Images Europe
The Chronicles of Djibril Cisse

34-year old Djibril Cisse, who last played professional football for Saint-Pierroise in the Reunion Islands, is quitting the game due to injury. The former Liverpool and Queens Park Rangers striker broke down in tears as he announced his retirement from football on Monday. Announcing his decision on French television, Cissé became tearful during a tribute from Guy Roux, his manager at Auxerre. “The body says stop, now it’s over,” Cissé told Canal+. “I can’t practise high-level football.”

You have to listen to your body – it is finished, yes. I can no longer play football at a high level. You have to know when to turn the page,” Cisse said.

Looking back on a glittering career

Djibril Cisse was marked out for success from an early age, graduating from the esteemed youth set-up at Auxerre and going on to tear apart Ligue 1 defences before earning a big-money move to Liverpool in 2004. The highlight of the striker’s career arrived at Anfield as he helped the Reds win the Champions League in 2005, with victory over AC Milan in Istanbul which has been dubbed the greatest ever Champions League final. Cisse, who won the UEFA Champions League with The Reds in 2005, had suffered horrific injuries in his career, which slowed down his progress. An example of such injuries was after a freak accident during Liverpool’s league match against Blackburn, which saw him break both the tibia and fibula in his leg.

Cisse managed to have a very good career regardless, scoring 257 goals for club and country. Aside from the 2005 triumph in Istanbul he also won the FA Cup and the UEFA Super Cup.

Cisse left Liverpool, first on loan, in 2006 and throughout his career has never been short of offers, having played for a whole host of clubs including French powerhouses Marseille, Greek giants Panathinaikos, Italian outfit Lazio and Queens Park Rangers. The Frenchman was often struck by horror injuries which affected him recovering his finest forms. His setbacks, may have cost him the chance to cement the legendary status in the game his ability pointed to.

Cisse was also renowned for his extravagant hairstyle, as shown below:

Overall, Liverpool was good for him. How could it have been otherwise? Coming from three-nil down to beat AC Milan in the 2005 Champions League Final was arguably the greatest moment of his career and nothing can ever top it. What he achieved that night in Istanbul was incredible. Reflecting on that night, Cisse’s remarks were; “I don’t know how we managed it, but we did and this sort of fairy story could only happen at a club with such a glorious European pedigree as Liverpool.”

In some quarters he is considered the only man that preceded the birth of Thierry Henry’s brilliance, while to others he was the real French star that was never quite the man.

Video tribute to the stellar of Djibril Cisse:

HOW PUMA IS WINNING THE SPORTSWEAR BATTLE IN AFRICA