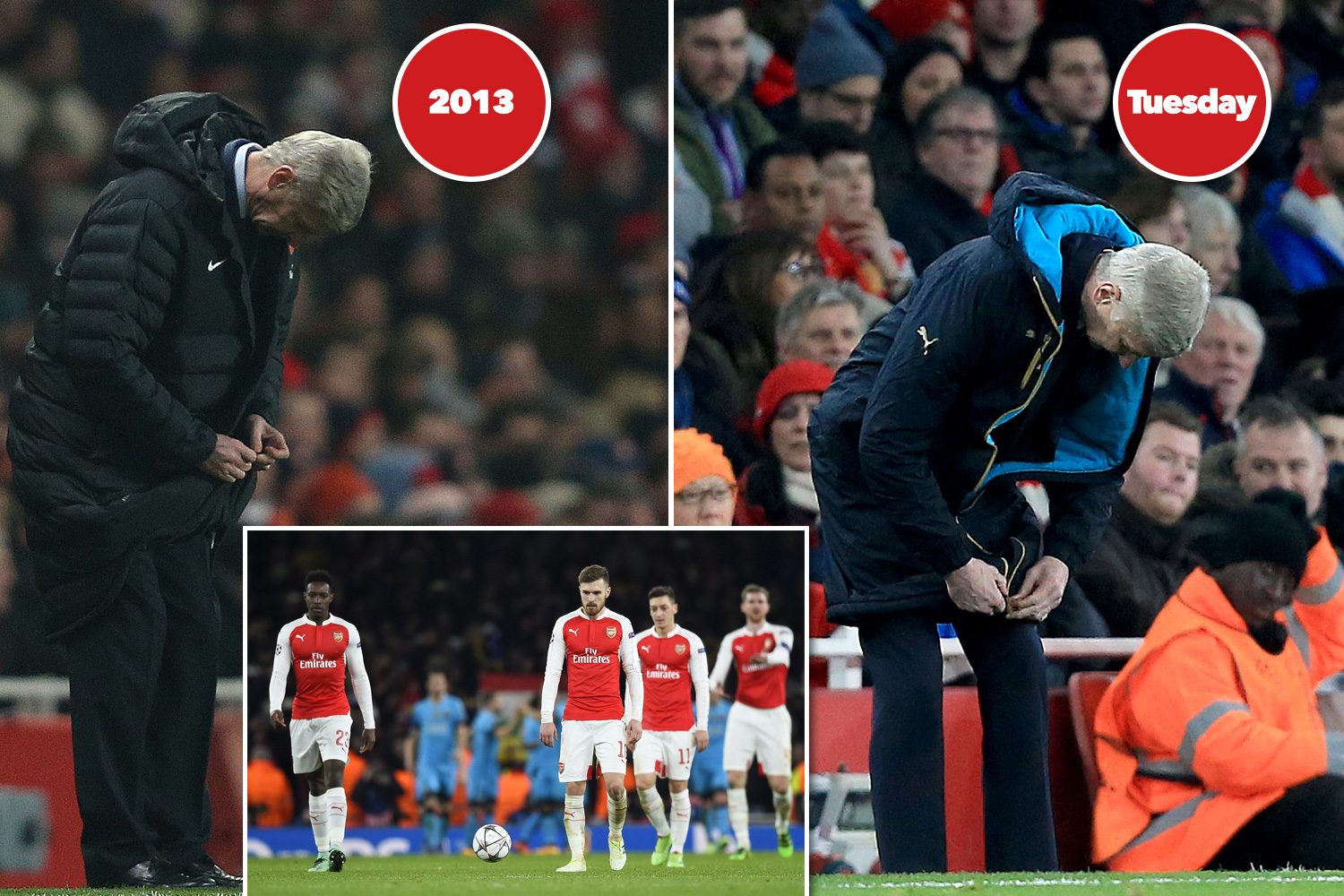 Monday Night Club with Mark Chapman, Jermaine Jenas, Charlie Adam and journalist Rory Smith on BBC’s Podcast took a deep analysis of Arsenal from a perspective many expected, but the truth is why does Arsenal keep suffering the same fate. If Arsenal are starting to buckle under the pressure the question is does that then elevate the title credentials of Leicester and Tottenham?

A loss to Barcelona mid-week at the Emirates Stadium all but ended the Champions League title hopes for the gunners yet another season. Which on some fronts might not have been the worse result understanding the Catalan club possess probably the best front line in world football, however, a loss to a young, slightly inexperience United side is a different devastating blow.

As he approached rival boss Luis Enrique following the 2-0 loss to Barcelona, the Arsenal manager was a picture of total frustration; looking dejected with every strike he took.

He is a man who does not have the answers to cracking Europe’s greatest club competition — and it looks like he will never find them. In 17 years of partaking in the competition under Wenger Arsenal have only reached the Champions League finals once.

The reality of Arsenal exiting Europe’s most elite competition at the knockout stages happens to be a recurring theme for the team from North London. Getting knocked out of the Champions League Round of 16 and struggling towards the tail-end of the season has become the norm for Arsenal fans in recent years. Celebrating a ‘decorated’ fourth place has become a prized accomplishment in the eyes of the clubs’ stakeholders, but frankly speaking, is this what the fans deserve?

It must be taken into account is that tickets for Arsenal games are the most expensive in the whole of English football. The club rarely spend in the transfer window; with Arsene Wenger attaining the reputation of being a shrewd business man. The club’s majority owner, Stan Kronke is a multi-billionaire capable of investing in a similar manner to Roman Abramovich of Chelsea. Lastly, Arsenal are known for paying considerably lower weekly salary to their first team members if compared to the other title contenders.

If we are being critical, the likes of Mesut Ozil, Alexis Sanchez and Santi Cazorla did not trade La Liga for the chance to parade a Community Shield or FA Cup in the streets of London when they signed with Arsenal. The bare truth is they came to compete with the best and possibly win league and champions league titles. Not too long are the days we saw stars like Robin Van Persie, Cesc Fabregas, Samir Nasri, Alex Song, Thomas Vermalean, Gael Clichy and Bacary Sagna all walk out on the London outfit in chase of glory. Which they all attained subsequently at their new clubs. Keeping that in mind, it should be cause for concern then that if things do not change rapidly at Arsenal before the end of the season the exit doors might appear wider for Arsenal’s current crop of stars.

Arsène Wenger complains with some validity about other clubs’ “financial doping”, spending more than they earn, but Arsenal’s celebrated, cerebral manager stands accused of inhabiting an environment at the Emirates where the focus on profit distorts sporting criteria. The widespread perception of Arsenal is that as long as they finish in the four lucrative Champions League positions, the board is happy. Who needs to win the title right? To quote one Jose Mourinho who famously stated; “If I hadn’t won a trophy in 4 years I wouldn’t want another contract,” the consensus within the gunner faithful is that the time for Arsene to step down from his post as head coach of Arsenal FC might be past due.

Arsenal’s commercial revenue was significantly bolstered by the club’s new kit partnership with Puma, which came into effect at the start of last term. The deal, believed to be worth £30m-a-year to the north Londoners, saw commercial revenue exceed £100million for the first time. Elsewhere, the club announced a pre-tax profit of £24.7million – rising by £20million from the previous year.

Despite the Emirates boasting a capacity of 60,432, match-day revenue is now ranked second behind both broadcasting and commercial as a source of capital for the club. Given the stated is it time for more spending by the board member of Arsenal. The club could do with significant influx of cash into the purchase of first team players. The days of players like Mathieu Flamini, Mikel Arteta and Tomas Rosicky at the emirates stadium are significantly numbered. Finding hidden gems like Mohammed Elneny and Francis Coquelin are benefits to any team, but ultimately one cannot win titles with such unproven talents. Investments in recruiting precocious talents such as Karim Benzema to North London should be the aim of the decision-makers.

IF ARSENAL MISS OUT ON TITLE AGAIN, FRENCHMAN SHOULD CALL IT A DAY

Sunday’s defeat at Old Trafford was the last straw for those that witnessed the humbling experience. Any remaining goodwill towards Arsene Wenger evaporated after Sunday’s insipid display. A Manchester United team averaging 24 years old, and being spear-headed by an 18 year old, only making his second senior appearance, minimized the attacking threats of Arsenal’s strike force.

The Arsenal manager, so often trumpeted as the last of the idealists, now looks like a dinosaur wallowing in his dogma. The days of Wenger being labelled “The Professor” as a tenured leader seem like light years go.  If the English Premier League title once again eludes the Gunners, then the greatest accountant in the club’s history should put away his calculator, clear his desk and head towards retirement.

Like the club, he’s all out of excuses. This was going to be Arsenal’s year. It had to be Arsenal’s year. There was not going to be another. The unpredictability of Leicester City’s form and Tottenham’s evolution as a genuine title contender makes Arsenal’s task of winning the league since 2005 more daunting. Before Chelsea, Liverpool and the two halves of Manchester return with a vengeance next season, this campaign represented a surreal mishmash of overachievers and plucky underdogs.

This might be the only chance for Wenger to go out on an open-top bus parade rather than through a side door on a cold gloomy sunday.