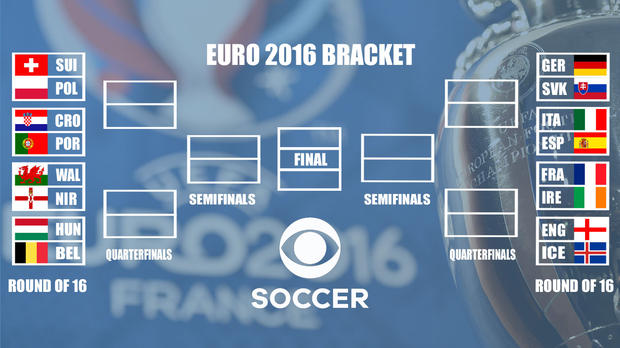 Image courtesy of cbssports.com
Euro 2016 Round of 16 Preview – Saturday’s Games

The group stage is over. Some would say it was very much non eventful while others would argue the  inclusion of eight extra teams has added a whole new level of uncertainty to the tournament. Whichever side you agree with one thing is for sure – no more messing around as the knockout stage is sure to bring out the best of all the teams.

A very even matchup on paper, this promises to be one of the most entertaining games of the Round of 16. Just looking at the teams and the way they have played in the group stage doesn’t necessarily scream pure entertainment but that is why I think this will be a great game.

Based on group stage results Poland is the favorite, considering they won two of three games and outplayed world champions Germany in their other game. They haven’t hit the stride yet which is the worrying part if you’re Switzerland. The Poles rely heavily on their superstar, Bayern’s Robert Lewandowski, who by his standards has had a very forgettable tournament. No goals, very few chances created for others and squandered the couple clear looks he’s had in front of the net, Lewandowski will be looking to finally contribute tomorrow.

His understanding with fellow strike partner, Arkadiusz Milik has been one the few bright spots for Poland, alongside a defense that hasn’t allowed a goal in the tournament. Tomorrow, more than ever, Poland will look to its main man to provide some magic and send the country to the quarterfinals, where either Portugal or Croatia will be waiting.

Switzerland have had a so-so tournament and will need a major improvement to get by Poland. They won against Albania by a mere 1-0 result and to be quite frank were second best in their other two matches versus Romania and France respectively. That being said they didn’t lose and played to a draw against one of the tournaments favorites in France. Defense and goalkeeping has been solid and the midfield, in particular Granit Xhaka, has had a very good tournament but the main problems lie in the attack. The Swiss have struggled to score and have yet to figure whom to go with up top between Embolo, Seferovic and Mehmedi.

If the Swiss continue to struggle again tomorrow the tournament could be over sooner than they hoped for. I simply see too much class and creativity in Poland’s strike force with Lewandowski and Milik finally clicking and sending Polska through to quarterfinals.

Two teams that no one really expected to get this far, or even in the fashion in which they did, has been nothing short of great to watch. Wales has impressed in topping the group that included England, Slovakia and Russia, while Northern Ireland lost by small margins against Germany and Poland and surprised Ukraine with a comprehensive 2:0 victory.

Wales will go into this match as a clear cut favorite and that in itself could make a difference because the players aren’t used to the “favorite” tag.

While it is different to play as a favorite when you’re not used to it Wales has players in Bale, Ramsey and Allen who are almost always expected to win when they play for their respective clubs and the rest of the team will follow their lead. The Welsh have simply played too well to have something like that stop them from continuing this incredible fairy tale of a tournament.

From the Northern Irish perspective it’s all about defense and set pieces, perhaps even a counter attack here and there. NIR’s best player has been their goalkeeper McGovern, who singlehandedly kept Germany at only one goal and he has to do the same tomorrow against Bale, Ramsey and others. No one expected them to advance past the group stage and to be fair, if not for the 3rd place spots being given entries into the Round of 16 they wouldn’t have made it. But that is not their fault and they will give it their all on defense to keep the Welsh at bay. Extra time and even penalties sound like a great idea to Northern Ireland and the longer game goes on at 0:0 the more of a chance they will have. Will it be enough though?

Northern Ireland will defend with everything they’ve got and hope for a set piece to score a winner. Unfortunately Wales is more talented and will prove it tomorrow with a couple goals in either half.

One of the marquee matches of the Round of 16 and for a good reason. The team that’s performed the best ‘arguably’ in the group stages against an underwhelming team but tournament’s biggest star player. Croatia is coming off a fantastic display against Spain while Portugal will come into this game trying to shore up the defensive frailties following a horrendous display in an extremely entertaining game against Hungary.

Croatia is flying high and there is no better time to play this Portuguese team than after one of the best victories in the history of the country. Victory against Spain came as a surprise because there were several first team players missing and the Spanish came out with their best starting eleven. The likes of Modric and Mandzukic were missing but you wouldn’t have known it by that performance. Ivan Perisic has been the revelation of the tournament and Croatia’s best player by far, terorrizing right backs up and down the left side with his trickery, speed and stamina. With Modric and Mandzukic returning to the starting 11 and joining Perisic and Rakitic among others, Croatia looks the part of someone who could not only beat Portugal but get all the way to the final in what is considered the easier side of the bracket.

Portugal has quality all over the pitch, at literally every single position, not just in the starting 11 but even on the bench. None of that matters, however, because it’s all about the main man – Ronaldo. When he is in a scoring mood (like he was against Hungary) there is almost no defense that could keep him at bay and Portugal look like a team that could go all the way to the final. On the days when his scoring touch is missing, the whole team suffers as a result of it.

His teammates suffer as a result of it because the more he pouts when he is not getting the ball, the more they look for him and get away from playing like a team. Croatia will be hoping that is exactly the case tomorrow and the likes of Nani, Joao Mario, Joao Moutinho and Andre Gomes focus more on pleasing Ronaldo than scoring goals themselves.

Croatia is playing better and have looked more of a team throughout the tournament than Portugal. Ronaldo on his day can change any game with one strike of the ball and he will look to do just that tomorrow. Team unity and cohesion prevails in this one against a one-man team in a very entertaining game in Lens.