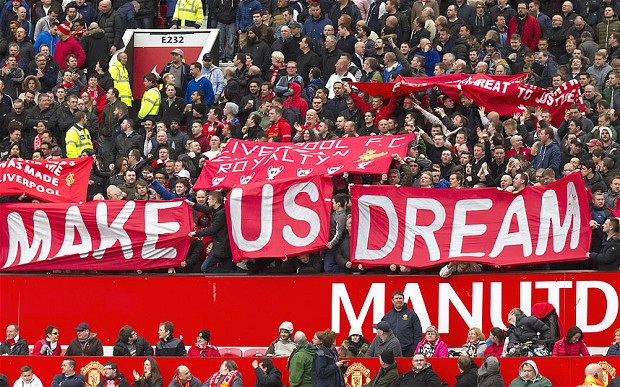 For The Good Of The Game

Image Courtesy of telegraph.co.uk
For The Good Of The Game

As the saying goes ‘Football is a funny ole game’ and never has that been more prevalent than with current state of the Premier League this season. As with my bets of the week, there are no more sure fire winners than betting your hard earned money on Bayern Munich, Barcelona or Paris Saint-Germain in their respective leagues.

The same used to be said about the EPL, with an educational spread of your cash or community predictions for Man Utd, Man City and Chelsea. You can’t say that any more, what with the meteoric rise of Leicester this season, LEICESTER, blinkin LEICESTER!

I, for one, along with most people feared the worst for Leicester when Claudio ‘Tinkerman’ Ranieri took over. He is a solid chap by all accounts but taking over a team with less money to spend than he is worth himself rang all sort of alarm bells.

Being wrong has never felt so right.

It doesn’t stop there with surprises, oh no. This season in the Premiership fans of clubs have wished their team bad luck in the short term in hopes of success in the long term.

Take Brendan Rodgers for example, well not literally, although thousands of Liverpool were fans were saying this not so long ago. There were ever increasing rumours in the press that he was only a few bad results from losing the Liverpool job. Then there was whispers, and by whispers I mean an outpouring of rants/opinions on social media hoping that he loses the next few games. It’s worth noting these rants were from Liverpool fans; other fans were nefariously hoping he stayed in the hot seat.

Is this the way of the football world now?

Liverpool fans wanting their club to lose to Everton in order to lose their manager? What happened to you’ll never walk alone? This was the Merseyside Derby, historical bragging rights forsaken for the good of the club. Turns out this was to be the sacking of Brendan, the ink barely dry on his termination papers once the final whistle was blown. The decision had been made before the game and what a bad PR exercise that would have been had Liverpool came away with the win. A collective sigh of altruistic relief from the directors that day.

We’ve seen this with other teams too, most recently with Man Utd & Van Gaal. United’s hotly contested match-up with Liverpool brought the same gestures from Man Utd fans. Lose this game and it’s toodle ooo Lou. Fortunately for Louis, not so much for the fans, Utd won thus extending Van Gaal’s stay of execution. Is he the Houdini of Holland, escaping yet another certain sacking by beating Derby in the FA Cup this weekend?

Time really looks like it’s up with Louis. The lack of activity in this transfer window, with 250 million spent already, is indicative of the current lack of trust the board has in him. Hedging their bets while make alluring eyes on the imminent arrival of Pep Guardiola on the British shores. Seems it’s better for United to lose now and win big in the summer.

Not restricted to teams, players are also the target of cruel but kind intentions. Much has been made of Arsene Wenger’s activity or lack thereof in the transfer market, only making moves when his hand is seemingly forced.

With an injury record keeping the NHS in the black, it’s Sod’s Law that the injured players come back a week before the transfer window. Adding to that the fact Alexis Sanchez both scores and creates a goal in his return in the FA Cup game against Burnley, removing a headache for Arsene but creating a ubiquitous one for the fans.

Wishing Coquelin, Sanchez and Welbeck one more week on the sidelines wouldn’t necessarily hurt the Arsenal faithful. Arsene adding to the world class ranks with a prolific striker, leading centre back and midfield cover for Coquelin or even just one of those would be an everlasting dream come true.

Emmanuel Eboue regaining fitness was always touted as ‘a new signing’ by Wenger, cue collective groan from fans alike. Waste not, want not, seems to be the ethos of the Professor of Economics, sorry I mean football where injuries implore transfer activity.

So is this disloyal from the fans or is it for the greater good? Has Klopp really been worth the uproar from Liverpool fans? Is no Champions League football next season worth the clamoring for Pep? Won’t Welbeck be better than a new signing as he’s already integrated into the squad?

These are questions I’d never thought I would ask! But then again – Leicester, Blinkin LEICESTER!