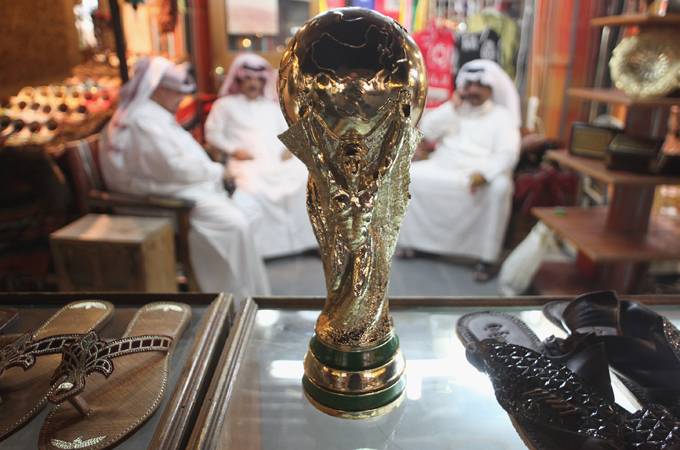 Qatar’s Pursuit Of Football Glory At All Costs

Qatar’s Pursuit Of Football Glory At All Costs

Qatar’s Pursuit of Football Glory at All Costs

The city of Eupen is a tiny German-speaking community in the far east of Belgium. Tucked away in the backwaters of the country’s complex federal system, Eupen has few attractions or other characteristics to recommend it as a place to visit or live. But, a multimillion dollar deal with the Qatari royal family recently brought Eupen into the public eye. The surprising investment was not in real-estate or natural resources, but rather in soccer.

In 2012, the Qataris acquired Eupen`s local football club, K.A.S. Eupen. Since then, the club has served as a training ground for players affiliated with Qatar’s preeminent football training institution, Aspire Academy. Under the patronage of Qatar’s ruler, Sheikh Hamad bin Jassim Jaber al-Thani, Aspire Academy was launched in Doha in 2004. As originally conceived, the project was designed to nurture “Qatar’s athletically talented boys.” But only a few years after its establishment, Aspire Academy’s Qatari founders dramatically expanded the institution’s activities.

Shifting its emphasis from homegrown sportsmen to foreign talent, Aspire Academy developed a more multinational focus with the establishment of Aspire Football Dreams in 2007 (originally named Aspire Africa). Aimed at bringing together young, gifted athletes from various developing and under-developed nations, the trailblazing initiative drove the academy’s activities far beyond Qatar’s national borders. Soon after Aspire Dreams’ launch, thousands of scouts were sent to Senegal where in 2008, they set up the organization’s first sister academy, Aspire Football Dreams Senegal.

All over the African continent, scouts from Aspire Football Dreams searched for the most promising young soccer players. Those who passed rigorous tests received training in the Academy’s sister facility in Senegal; the cream of the crop was transported to Qatar and eventually made its way to Doha’s football pitches to play on domestic squads. Later, Aspire Dreams expanded its international recruitment to countries like Thailand, Guatemala and Paraguay.

Qatar’s pursuit of foreign talent grew out of its weak domestic football scene. A nation of two million residents, of whom merely 280,000 are citizens, Qatar’s football history is virtually non-existent. As a consequence, the country’s national football league – Qatar’s Stars League – has long banked on imported players. Aspire Football Dreams was set up to answer the high demand for foreign talent and has successfully attracted dozens of brilliant teens from all over the world.

Five years after establishing Aspire Football Dreams, Qatari investors realized the country’s domestic leagues did not provide enough competition for its more talented players. This brought investors to Eupen, where the best footballers affiliated with Aspire Dreams are given the opportunity to play in the Europe’s more challenging soccer leagues.

The Academy’s patrons aspire to train a generation of world-class players capable of raising the level of football played in Qatar. The Qatari royal family also, however, enjoys the PR benefits that flow from the project. As the Academy’s executive director, Dr. Andreas Bleicher put it: “Qatar in general, tries to help developing countries … [and] as a sports academy, we wanted to do a humanitarian project in sport.” The Academy’s website describes its own work as a “fascinating humanitarian project.”

But, critics of Aspire Academy see the initiative as a rather crafty investment in cheap, underage talent. On social media, commentators have even drawn parallels to the practices of Ancient Rome, where the strongest among the slaves were given the opportunity to (re)gain their freedom by dueling in amphitheaters while entertaining jubilant crowds. Comparisons with Roman history are, obviously, farfetched. Yet, celebrating Aspire Academy’s humanitarian efforts is equally fantastic. With a non-existent democracy, a fondness for supporting rebels, and a terrible record for upholding human rights, Qatar’s contemporary history does little to vouch for its supposed humanitarian credentials.

Shedding more light on the motivations behind the Academy’s work, a recent two-part series by The New York Times and an earlier article by Slate suggest that the Academy’s efforts might be closely related to Qatar’s World Cup bid. According to both reports, the Gulf nation’s eventual aim may be to naturalize some of its foreign players to increase the standing of its own national team. As the host of the 2022 games, Qatar’s football team automatically qualifies for the competition. In doggedly pursuing international talent, Qatari officials may hope they can save their national team from being humiliated during the tournament.

According to The New York Times, Qatar may have also used the sports initiative as a means to win its bid to host the World Cup, which it secured from FIFA in 2010. As the article explains, at least 5 out of the 24 members of FIFA’s executive team – Guatemala, Ivory Coast, Nigeria, Paraguay, and Thailand – were in all probability directed to vote for Qatar after receiving aid from the Academy.

These reports are among the latest stories to discredit Qatar’s football ambitions. On June 1, a bribery scandal negatively affected Doha’s reputation. The Sunday Times reported that Mohammed Bin Hammam, a Qatari national and former member of FIFA’s executive committee, had given US $5 million to FIFA officials to propel Qatar’s World Cup bid. Also, in February 2014, the Guardian reported that at least four hundred Nepalese and nine hundred and seventy-four Indian immigrant workers had died on World Cup construction sites in Qatar. Ramping up the football controversy, on July 28, the Guardian published a story claiming that many of the immigrant workers employed at these sites had not been paid for more than a year.

In time, Qatar’s soccer ambitions may indeed turn out to be harmless. For now, however, the Gulf kingdom’s global ambitions, whether in sport, finance, or politics, are fueling credible suspicions about less than innocent ulterior motives.

MANEL EXPÓSITO: The Man From Barca