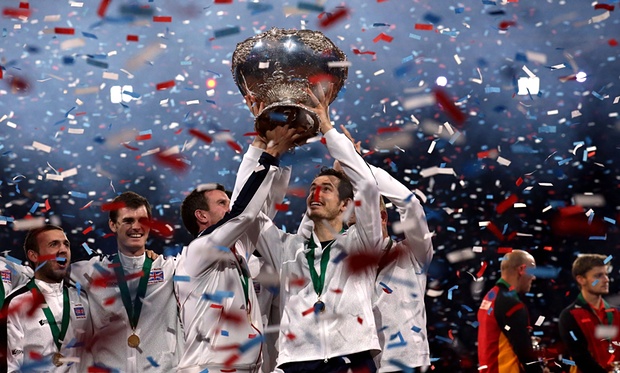 Almost 20 years ago, Britain’s Jamie and Andy Murray were going through a routine day at their school in Dunblane, Scotland before everything in the town changed forever.

Andy and Jamie’s mom Judy Murray heard that a shooting had taken place in the school, but it emerged only later that 16 children and a teacher had been killed by the assailant who then turned a handgun on himself.

Eight-year-old Andy and 10-year-old Jamie hid under the desk during the massacre and survived. Had they not, we probably would not have seen the fairy-tale ending at this year’s Davis Cup final, where two brothers joined hands to give Great Britain their first title at the event in 79 years.

Things did not come easy for Britain in the final, as they first had to contend with a tough five-set loss to Belgium in the opening singles match. Kyle Edmund had a two-set to love lead but squandered it and lost to David Goffin after looking so convincing in the first two sets.

The following match went as per script as World No.2 Andy made light work of Ruben Bemelmans, beating him in straight sets to tie the score at 1-1. It wasn’t easy for Andy to adjust to the indoor clay surface chosen by the Belgians, who made sure they made the final as tough for the Brits as they could.

The doubles on Saturday was the one that drew most attention though, not just because it presented Britain with an opportunity to gain a crucial 2-1 lead but because it featured two brothers aiming to enter the history books. You would have seen brothers dancing together in a pub or starting a million-dollar business, but to see two men of the same blood fighting for their nation on the tennis court is something else.

As it turned out, the Murray brothers beat the pair of Steve Darcis and Goffin comfortably in four sets in front of a loud pro-British crowd in Brussels. The fans had made the trip to Belgium despite threats of another ISIS attack at the venue, following the awful carnage that took place in Paris earlier this month.

Andy then turned out with vigour on Sunday to beat Goffin in straight sets (6-3, 7-5, 6-3), giving Britain a clinching 3-1 lead in the best-of-five and at last a memorable triumph in the Davis Cup final. The victory was probably not as comprehensive as Andy’s recent 6-1, 6-0 win over Goffin at the Paris Masters but it was good enough for the British fans.

The story of the the two brothers becomes even more melodramatic considering Jamie had been a better player than Andy in their younger years, someone on whom the younger brother relied for inspiration.

Murray’s biographer Mark Hodgkinson recounts in his book: “The first overseas tournament Andy went to, he was nine and Jamie went as well. It was an under-11 tournament in France, and Andy got to the semi-final and lost in three long sets to Gael Monfils (who would go on to become an elite player in the senior game), and Jamie got to the final and beat Monfils, one and love. ‘And the whole way back home, Andy was saying, ‘You only won because I tired him out for you,'” their mother Judy recalled.

Without Jamie, Andy may never have had a future in tennis, Hodgkinson writes. The elder Jamie was not just better at tennis but also more intelligent with the better looks of the two. Andy always aspired to not just beat his brother but to crush him in tennis.

Now as they have grown to become tennis professionals, Andy has found his success in singles while Jamie has made his name as a formidable force in doubles.

Although Andy has obviously made more fame and money as a tennis player especially after his 2013 Wimbledon triumph, he rarely misses to watch his brother’s match along with mother Judy, who has a tough time choosing which match to watch when her two sons are playing together on different courts.

In fact, there have been times when Andy has felt strange tension to succeed for his brother on the doubles court, something very different from the rivalry sisters Serena and Venus Williams have to deal with.

In 2007, when Jamie won the mixed doubles title at Wimbledon partnering Serbia’s Jelena Jankovic, Andy took offense to a question where he was asked whether he felt jealous about his brother getting to attend the Wimbledon Champion’s Dinner first.

In celebrating the Davis Cup triumph in Brussels on Sunday, the Murray brothers shared pride on ensuring a place in the history books for Britain, and observers spoke about catching glimpse of a rare, magical ‘bromance’.

Britain had its first home Wimbledon champion in 77 years in the form of Andy Murray in 2013 and now it has its first Davis Cup title in 79 years. What’s next- A Brit World No.1 in singles? Andy will sure have his eyes on that come next year.

The Doherty brothers may have led the nation to the Davis Cup title for four straight years from 1903-06 but the emotional story of Andy and Jamie Murray is the stuff of legends, one that Britain will cherish for a long time to come.