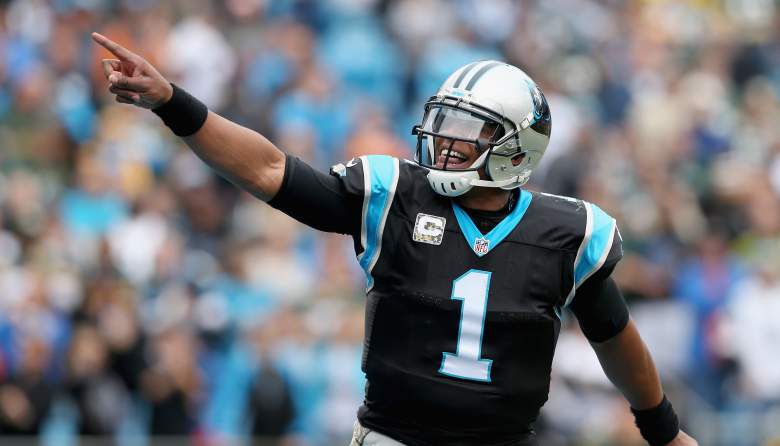 An object in motion stays in motion — and the Carolina Panthers are rolling.

Quarterback Cam Newton led the Panthers to a 44-16 drubbing of Washington Redskins on Sunday, throwing five touchdown passes and pushing his team to a NFL best 10-0. As the quarterback on the joint best team in football (New England is undefeated as well), Newton is obviously a front runner for MVP. But do his credentials stack up with more traditional passers? Let’s take a look.

A quick look at his statistics (courtesy of ESPN.com) reveal Newton has accounted for 20 passing touchdowns and 6 rushing touchdowns, while throwing 9 interceptions and fumbling twice. That puts him tied No. 6 in passing touchdowns and tied for third in rushing touchdowns (easily No. 1 among quarterbacks), and No. 2 in rushing yards for quarterbacks. But he ranks No. 20 in yardage, 28th in completion percentage (currently a career low 56.9% clip), and just 17th in passer rating at about 90.1. Those are hardly rankings one associates with an MVP quarterback. Consider last year’s MVP, Aaron Rodgers, threw for over 4,000 yards, 38 touchdowns, completed almost 66% of his passes and finished with an average passer rating over 112.

This is not a knock Cam Newton’s skills as a passer, but it does point out the reality of the 2015-16 Carolina Panthers: they a running team with an elite defense. Ranking as the No. 4 rushing offense and No. 6 in total defense, the Panthers are not your traditional offensive juggernaut, but rather your traditional ground and pound team. They just happen to have a quarterback with the absolute perfect skill set for that offense, a running back in a tight end’s body with an arm that can throw it a mile.

Most teams boasting an MVP caliber quarterback generally have dynamic weapons surrounding him.  But while Newton has established a rapport with a receiving corps. missing it’s No. 1 receiver in Kelvin Benjamin, (who tore his ACL after a breakout rookie campaign), they are not exactly the most formidable group. Receiver Ted Ginn Jr. has revitalized his career in Carolina, and his speed on the outside is complimented by Newton’s ability to chuck the ever-loving bejesus out of the football with the cannon he calls a right arm. Another receiver Corey Brown has proven a serviceable intermediate threat, and first round pick Devin Funchess has started to come on after being invisible for much of the season. Tight end Greg Olson continues to be Newton’s favorite target, catching six touchdowns and is well on his way to over 1,000 receiving yards. Even though Olson is a talented offensive tight end, it generally does not bode well when a tight end leads the team in receptions, yardage, and targets. While Newton might have the ability to run a pass-centric offense, he does not have the players around him.

Cam Newton is, however, like no other quarterback the league has seen. At 6’5″, 245, he has the ability to outrun linebackers and run over defensive backs. More importantly, his mere presence on the field means the defense reacts a half step slower, waiting to see if Newton is going to keep the ball before back peddling into coverage. Newton has a nose for the first down marker too; about 40% of his rushes end up in first downs, tops in the league and a crucial factor in an offense where holding onto the ball is vital. That keeps their defense rested and sharp, a large reason they have played at such a high level this season. Add in the fact that linebackers and safeties have to respect his deep ball and you leave defenses reacting a step slow to the running game, meaning Newton or talented running back Jonathan Stewart have gaping holes to run through.

Is Newton elite? As a passer, he is talented, but still lacks the finer points of quarterbacking that Tom Brady, Aaron Rodgers, and Drew Brees have mastered. He throws too high and too hard too often, especially to a group of receivers that are not especially physical at the point of the catch.  But he has shown improved pre-snap decisions this season, is working with a mix-and-match group of receivers, and is still only 26. It would not be surprising if he moves himself into the elite category of passers as he gets better weapons on the outside and becomes even more experienced.

But as player? No one does as much for their team as Cam Newton. His physical abilities cover up for a patchwork offensive line and less than dynamic receiving corps., while enabling a talented defense to play with ferocity and abandon by ensuring they are well-rested. He maximizes their abilities, as proven by the 10-0 record they sport this year, and the 14 straight regular season games they have won dating back to last season. He gives the team a swagger, one that some may find obnoxious and others recognize as simply the attitude of an athlete at the top of his game. Should the Panthers continue their streak, Mr. Newton should see some hardware in his future.

The NFL Faces a Collision of Crises

JOSE: THE HUMILIATED ONE