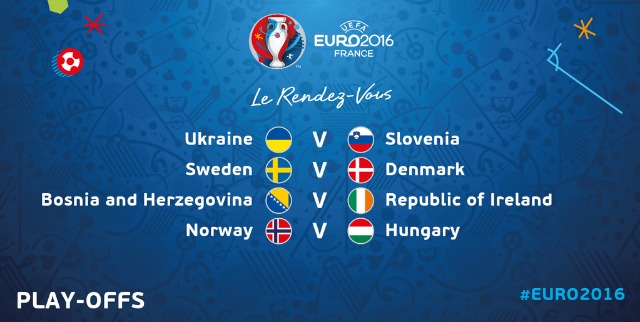 Ok, so admittedly yesterday didn’t go as planned. I expected Bosnia to play better in front of their own fans knowing only a good result will do before Monday’s return leg in Dublin. It wasn’t about underestimating Ireland, far from it, it was simply expecting more from a team with more stars and facing a team that had injury problems. Turns out Ireland didn’t care about that as they left Zenica with a great 1:1 result and will look to finish the job at the Aviva Stadium on Monday night in Dublin.

Tonight there are two games and both are extremely intriguing in their own way. In light off the inexplicable acts of terror in Paris last night UEFA decided that today’s game will go as planned. The only way to counter terrorism is to lead our life as normal as possible and games being played tonight will be just an example of it.

On paper not the sexiest of matchups but this will be a very intriguing tie. Going into it I would put Ukraine as a slight favorite due the fact that they have had a better qualifying campaign. They have won more games and have a much better defensive record than Slovenia, allowing only four goals in qualifying to Slovenia’s 11. Ukraine has star offensive players in Yarmolenko and Konoplyanka. Once you combine those with the goals conceded stat and it’s clear to see why they would be picked as slight favorites.

Slovenia on the other hand have quality of their own with the likes of Inter Milan’s Handanovic in goal, as well as Fiorentina’s Ilicic and Leverkusen’s Kevin Kampl providing attacking prowess. Slovenia had issues on defense in qualifying and conceded 11 goals as a result of that but going forward was a different story. Slovenia scored 18 goals and gave England hard time in Ljubljana, in a game they eventually lost but easily could have taken 1 or 3 points from it.

In 1999 the same two teams met for the chance at Euro 2000 and Slovenia prevailed over two legs, something Ukraine players and fans will all be aware of. In a tight but entertaining game I see Ukraine coming on top with a 2:1 scoreline.

There are a lot of storylines here but none bigger than whether Zlatan Ibrahimovic will miss out on yet another major tournament. Ibra missed out on the World Cup in Brazil and made the world know about it when he proclaimed that it wouldn’t be the same without him. Putting his never-ending arrogance aside, he is can’t miss kind of a player and major tournaments are better when those players participate in them.

Sweden has had better qualifying campaign and narrowly missed out on getting in as the top 2 seed behind Austria and Russia. They scored almost twice as many goals as Denmark (15 -8) while also conceding more as well (9-5). The Swedes play the more attacking brand of football and have promised to do so in the first leg tonight. Having a star player on the team helps and if Ibrahimovic is form tonight it could shut down the door early on this tie.

Denmark go into this matchup as the underdog but shouldn’t be underestimated at all. They have skilled players on defense in Kjaer  and Agger while the midfield is led by Tottenham’s Christian Eriksen. Up front Nicholas Bendtner and Martin Braithwaite will pose threat to the Swedish goal all night long. In all honesty Denmark have the better tame top to bottom, the only question remains whether they can stop Ibrahimovic from influencing the game.

I think Sweden comes out on top tonight thanks to Ibrahimovic and a raucous home crowd in Solna, but that will leave the tie far from over with Denmark fancying their chances in Copenhagen.