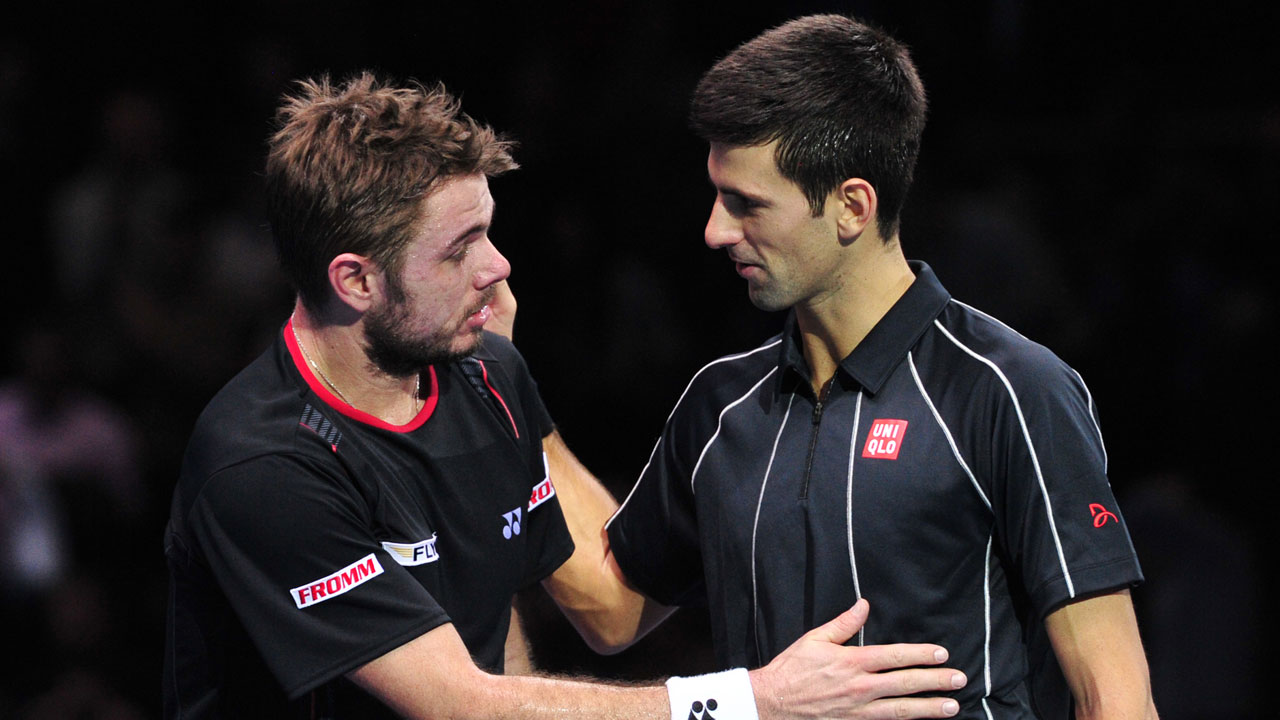 Djokovic vs Wawrinka: A Rivalry For The Ages

Photo Courtesy of Sportal.com.au
Djokovic vs Wawrinka: A Rivalry For The Ages

Did Stanislas Wawrinka just beat Novak Djokovic again? Was he able to produce an upset once again in the semifinals of the Paris Masters on Saturday? Not quite.

Well, Djokovic might have prevented another upset against the Swiss this time but there’s no denying the fear and anxiety the World No.1 feels every time he faces Wawrinka. Over the course of the last three years, these two have in fact never failed to produce matches of class.

PARIS, FRANCE – NOVEMBER 06: Novak Djokovic of Serbia walks out to play his match against Tomas Berdych of Czech Republic during Day 5 of the BNP Paribas Masters held at AccorHotels Arena on November 6, 2015 in Paris, France. (Photo by Dean Mouhtaropoulos/Getty Images)

Novak Djokovic has had one of the best seasons to date. The Serbian has won five Masters Series titles alongside three Grand Slam titles and is now in search of his final title ahead of the Barclays ATP Finals in London. The French Open is the only title that has eluded the World No 1, and it was Stan Wawrinka – his opponent on Saturday –  had denied him a clean Grand Slam sweep in 2015. The pair have had a long rivalry for over a decade, and had played each other 24 times in all competitions prior to tonight, with Djokovic leading by a mammoth 20-4 margin.

Although Djokovic was playing to earn an opportunity at his third straight Paris Masters title in the French capital on Saturday, Wawrinka had nothing to lose. The Serbian was able to dominate during most of the first and third sets but Wawrinka went down with a fight that forced Djokovic into losing his temper, picking up up a racquet abuse warning and making routine errors.

During occasions, Wawrinka even left Djokovic looking for answers and the crowd gasping with awe. The Swiss came back from 2-0 down in the second set to close it out at 6-3, egging engrossed spectators to give him a loud cheer before heading into the final set.

In the end though, Djokovic impressed with his all-court play, reaching his fourteenth straight men’s singles final across tournaments, a new record for a single season in the open era. The close saw Wawrinka and Djokovic embrace each other at the net and the commentator was quick to point out the amazing friendship these two enjoy despite being fierce rivals.

As things stand, after the 6-3, 3-6, 6-0 victory over Wawrinka (don’t go by the scores), Djokovic will face Andy Murray in the final on Sunday. The Brit earlier beat Spain’s David Ferrer comfortably in straight sets, 6-4, 6-3.

When it comes to giving Djokovic a taste of his own medicine, nobody does it better than Stan the Man. Turning defense into attack is something Djokovic is well capable of both from the backhand and forehand side. But Wawrinka can defend extremely well on the backhand side with his effective one-hander and can even control the pace with his heavy cross-court forehands. This is something that troubles the Serbian more often than not and he is known to get irritated once he loses the onus of dictating play.

Djokovic and Wawrinka may have played many more matches before the epic five-setter in the fourth round of the 2013 Australian Open but this one stood out for the intensity with which it was played. Djokovic, who went on to win the title, barely survived and later confessed that he was indeed lucky to come through. Score: Djokovic bt Wawrinka 1-6, 7-5, 6-4, 6-7, 12-10.

The two played again in the Australian Open of 2014, this time in the quarterfinals, with Wawrinka getting the better of his Serbian counterpart once again in five sets and then going on to win the title. Score: Wawrinka bt Djokovic 2-6, 6-4, 6-2, 3-6, 9-7.

At the French Open this year, Djokovic found himself in the final with a chance to complete his career Slam. And once again, standing in front of him was Stan the Man. In a shocking result, Wawrinka beat Djokovic for the fourth time in his career in the final of 2015 Roland Garros. This particular win was not only the most comprehensive for Wawrinka in their head-to-head but also the most torturous for Djokovic, who failed once again in his elusive quest to join the immortals. Score: Wawrinka bt Djokovic 4-6, 6-4, 6-3, 6-4.

In recent times, Djokovic’s dominance has stretched to a level that he once held more ATP ranking points than Roger Federer and Murray at  No.2 and 3 combined. Only one man has come close to giving Djokovic a scare almost every time, and that clearly has been none other than Wawrinka. The 21-4 head-to-head in favor of Djokovic is no indication of the fight between these two in recent times.

For fans over, this rivalry could be reignited as we head to the season-ending ATP World Tour Finals beginning November 15 in London. As per the draw predictions, a semifinal meeting between Wawrinka and Djokovic is very much on the cards.

As Djokovic aims at a record fourth straight title, will Wawrinka be able to deny the Serbian once again in London? We sure will have to wait and watch out for that mouth-watering contest.