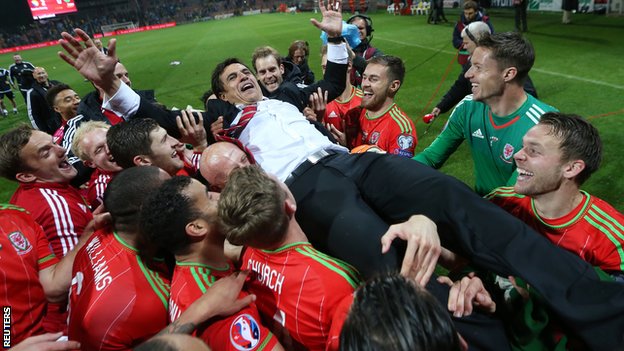 Wales manager Chris Coleman said his team have earned the right to be labelled the ‘Golden Generation’ after qualifying for Euro 2016.

Wales had qualified for next year’s showcase tournament in France with a game to spare in Group B and crowned it with a 2-0 win over Andorra on Tuesday night. Captain Aaron Ramsey and Gareth Bale ensured a Welsh victory before a sold-out crowd in Cardiff.

“The team were labelled the ‘golden generation’ before they’d earned it. Now they’ve earned it,” said Coleman.

“They deserve it. You get team spirit from working hard for each other on the pitch and coming through tough situations and big challenges, and they’ve done it time after time.”

The Welsh team lost 2-0 in Bosnia-Herzegovina on Saturday night but a place at Euro 2016 was confirmed when Cyprus beat Israel 2-1.

It will be Wales’ first appearance at a major tournament since the 1958 World Cup.

Netherlands Lose To Czech Republic, Fail To Qualify For Euro 2016