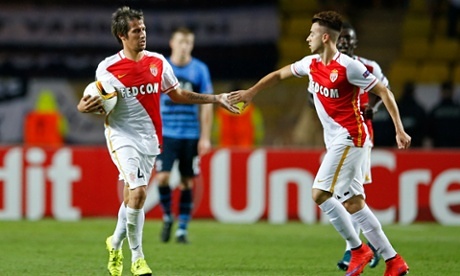 Stephan El Shaarawy snatched a late point for Monaco as they drew 1-1 with Tottenham in Group J of the Europa League.

The on-loan Milan striker made a crucial intervention at Stade Louis II as he headed home a cross from fellow substitute Nabil Dirar.

El Shaarawy’s strike cancelled out Erik Lamela’s first-half opener for the visitors, with Tottenham having slightly edged a lacklustre start to the contest.

Monaco’s attempts to get back into the game seemed to be getting them nowhere until Dirar found room on the right, and his pinpoint cross was headed home by El Shaarawy.

Dirar’s late cameo nearly produced a late winner for the Ligue 1 side, but Tottenham clung on to a point to ensure they remain unbeaten in the group.

It took 20 minutes for the match to have its first chance following a drab opening. Harry Kane drew Danijel Subasic off his line before finding Nacer Chadli unmarked on the left edge of the penalty area, but the Belgium international’s attempt to curl his shot into the unguarded goal was just too high.

Just after the half hour, the deadlock was broken as Lamela fired home following a swift counter-attack. The forward pounced after Dele Alli – celebrating his first senior England call-up – saw his shot saved by Subasic, with a kind ricochet off Andrea Raggi falling perfectly for Lamela.

In a total reversal of the opening exchanges the half finished with chances at both ends.

Dangerous crosses from the left were headed wide by Fabio Coentrao and Lacina Traore, while Thomas Lemar saw his low effort saved by Hugo Lloris before Alli was denied by Subasic.

Any momentum both sides had built up before the break disappeared after the restart, with only a long-range free-kick from Christian Eriksen causing any concern in either goal.

Monaco posed more of a threat than their visitors as the match drifted towards the hour. Their attacking play promised much but failed to produce enough quality in the final third, leaving Lloris untested.

With 71 minutes played Tottenham suddenly burst into life and saw Eric Dier and Kane presented with chances to extend their advantage. Neither was able to convert, though, as Subasic twice showed a safe pair of hands.

With nine minutes to play, two of Monaco’s substitutes combined brilliantly to draw their side level, Dirar’s perfectly placed cross found El Shaarawy to head past Lloris from close range.

Dirar should have sealed all three points for Leonardo Jardim’s side in the closing minutes, but he was denied by Lloris to ensure the spoils were shared.

Dortmund Fail To Win In Greece