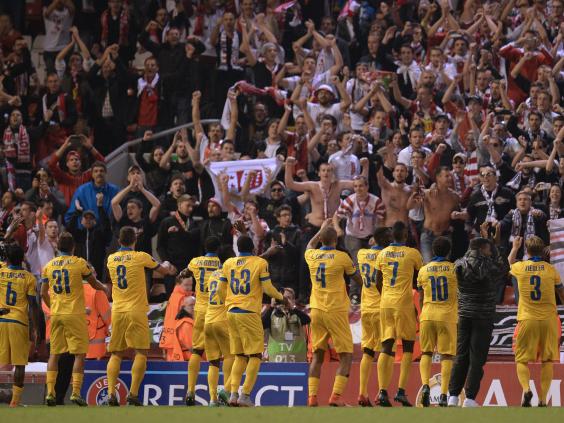 Liverpool registered their second successive 1-1 draw in this season’s Europa League as they were held at home against Sion.

Adam Lallana gave the English side the perfect start at Anfield, turning home Divock Origi’s cross after four minutes for his second goal in as many matches in Europe this term.

However, an unlikely equaliser from Ebenezer Assifuah after 16 minutes allowed the Swiss visitors – who had lost 6-3 on their last visit to the venue – to pick up a point that leaves them top of Group B.

Liverpool huffed and puffed in the closing stages but Brendan Rodgers’ side, without the services of watching duo Christian Benteke and Daniel Sturridge ahead of Sunday’s Merseyside derby against Everton, were wasteful in front of goal.

They had made the perfect start to their 350th European fixture when Lallana broke the deadlock after only four minutes.

The midfielder was given the simple task of turning home Divock Origi’s cut back from the touchline, the Belgian having shown excellent pace and strength to get clear on the right.

Jordan Ibe fired in an effort from a tight angle that Sion goalkeeper Andris Vanins deflected wide, while Danny Ings took too many touches to get a shot away, as Liverpool looked threatening going forward.

It seemed only a matter of time until they doubled the lead, only for Sion to knock the stuffing out of them with an equaliser against the run of play.

Sloppy work by Nathaniel Clyne led to Assifuah being set free down the right channel, the Ghanaian controlling the ball on his chest before nudging it through the legs of the onrushing Simon Mignolet.

The goal – coming from Sion’s first real foray into enemy territory – stunned the Kop into silence.

A nervous atmosphere ensued, though Liverpool saw a goal from Ings rightly chalked off for offside before Origi dallied long enough to allow a defender to get across and block his eventual attempt right before the break.

Rodgers saw his team start the second half in similar fashion to the first, though their bright beginning quickly fizzled out.

Philippe Coutinho was summoned from the bench with an hour gone to try and provide a spark, though it was Joe Allen who produced a superb pass to provide Origi with a one-on-one chance that he again squandered, shooting at Vanins’ legs.

Lallana made the same mistake when Alberto Moreno’s ball over the top found him clear of the defence, meaning he was unable to finish a frustrating night as he had started it.

Dortmund Fail To Win In Greece