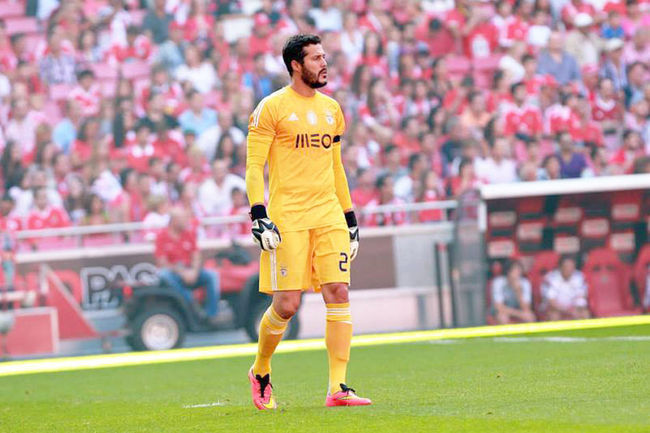 Cesar Delighted With Win At Atletico

After his superlative performance in the shocking 2-1 win at Atletico Madrid, Brazilian goal minder Julio Cesar showered encouraging words on his Benfica team mates saying it was a “perfect night.”

Nicolas Gaitan and rising star Goncalo Guedes scored the goals for Rui Vitoria’s men, who beat Spanish opposition in a European tie for the first time since 1982.

Coupled with Galatasaray’s draw against Astana in the other group match, victory at the Vicente Calderon has propelled the Portuguese side to the top go Group C.

“It was a perfect night for us because of the draw in the other group game,” said Cesar. “We are very happy!

“Our coach prepared us well for this match, he made us believe that we could come here and take the three points.

“Winning this match, against teams of the level of Atletico, it’s always nice because it brings confidence.”

Cesar played a key role in securing the three points for the visitors, pulling off a string of superb saves, especially in the second half.

But the veteran Brazilian responded modestly when asked about the spectacular double block he produced to thwart Jackson Martinez and Antoine Griezmann just before the hour mark.

“That double save?,” he said. “That’s what I’m there for, that’s the job of a goalkeeper.

“I had a good performance tonight and I hope I can replicate it many times in the future.”

Gaitan was one of the visitors’ other star performers, claiming an assist as well as his first-half goal, while Luisao was a commanding figure at the back and top scorer Jonas was a constant threat up front.

Benfica’s next Champions League date will see them visit Galatasaray, while domestically they will look to chalk up their first away league win of the season at lowly Uniao Madeira on Sunday.