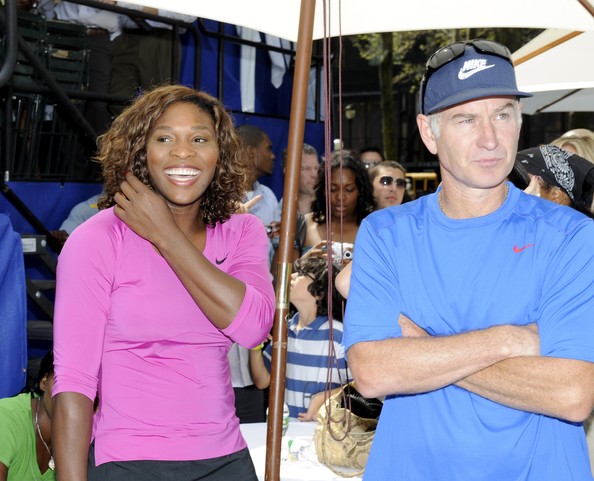 Former world number one  and four-time US Open winner, John McEnroe has said that Serena Williams is the greatest female tennis player ever.

Serena Williams looks on with John McEnroe before their match at the DIRECTV ESPN US Open Experience promoting DIRECTV’s mosaic coverage of the US Open August 26, 2009 at Bryant Park. © Rob Tringali/Getty Images

Serena is on the verge of winning her first calendar slam having already won all three previous Grand Slam titles this year. She is just two matches away from making history as she defeated her sister, Venus Williams 6-2 1-6 6-3 in the quarter finals of the US Open at the Flushing Meadows.

McEnroe opened while speaking to BBC Sport that the 33-year-old is the greatest female tennis player he has ever seen and will remain so even if she fails to bag the calendar slam.

“She’s the greatest female player I’ve ever seen. She’s proven it to me over and over,” John McEnroe said.

“I think Serena is one of the all-time greatest athletes, period. Man or woman.

“You’re looking at an incredible athlete and we’ve got to enjoy this last year or two that we have her around, because there’s going to be a huge void when she’s gone,” the seven-time Grand Slam winner added.

It is recorded that ticket sales for the women’s final at Flushing Meadows overshadows that of the men’s for the first time ever and TV viewing figures have skyrocketed in anticipation of a first calendar slam win since 1988.

“It was a boost for the US Open in general,” said McEnroe.

“Obviously for women’s tennis it helps a great deal because without Serena, where would they be right now?

“I bet you 98% of people in the States couldn’t tell you who the other three semi-finalists are.”

Serena Williams face Roberta Vinci in the second semi-final on Friday, while Simona Halep will play against Flavia Pennetta in the first semi final on the day.